Bing Crosby was and is a Palm Springs legend. 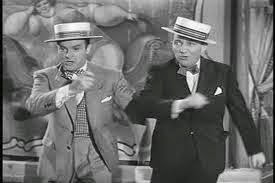 Born Harry Lillis Crosby on May 3, 1903, "Bing" grew up to become one of America's most popular entertainers of all time. In 1931, Crosby launched his hugely popular radio show. He soon started starring in films, winning an Academy Award for Going My Way in 1944. Throughout much of his career, Crosby dominated the music charts with nearly 300 hit singles to his credit.

To most Americans, he was the eternal Crooner: a much celebrated and beloved performer of unparalleled popularity. Yet Bing Crosby was far more than that: He was an architect of 20th century entertainment, a force in the development of three industries that barely existed when he came into the world: recordings, motion pictures, and broadcasting. As the most successful recording artist of all time; an abiding star of movies, radio, and television; and a firm believer in the wonders of technology, he helped to transform and define the cultural life not only of the United States, but of the world.

Paramount Pictures brought him to Hollywood to star in The Big Broadcast; the studio quickly signed him to a three-picture deal that grew into a 20-year association.

Bing’s popularity really took off a year later, when NBC asked him to take over its faltering program, The Kraft Music Hall. Bing turned it into the archetypal broadcast variety show, a template still in use today.

Crosby's film career continued to flourish, reaching its peak in the 1940s. He co-starred with comedian Bob Hope in the wildly popular series of Road pictures, which began with 1940's The Road to Singapore. The on-screen dynamic duo forged a genuine affection for each other off-screen as well. Crosby and Hope remained friends for life, and appeared together in numerous films. Dorothy Lamour was their female lead, together the three made seven Road movies together.

Blue Skies Trailer Village founded by Bing Crosby in the mid-1950s exists today as a private mobile home park. It is located at 70260 Highway 111 in Rancho Mirage, California.
One of the highlights of the, Blue Skies Trailer Village is the street signs. Every street is named after one of the original investors including many Hollywood stars such as Jack Benny, Claudette Colbert and Phil Harris.

In 1957Bing built his luxurious Thunderbird Country Club residence. It is located at 70375 Calico Road in nearby Rancho Mirage, California.

For many years Bing Crosby had a restaurant in Rancho Mirage, California on at 71743 Highway 111, just minutes from downtown Palm Springs.

Bing loved sports. He spent considerable time on the golf at horse racing tracks and on the golf course. He was instrumental in building the Del Mar race track. He helped establish the Bing Crosby National Pro-Amateur tournament in the late 1930s.

Bing Crosby earned many accolades and awards during his life. Perhaps the most prestigious was in 1944 when Bing won an Academy Award for his performance as Father O’Malley in Leo McCarey’s Going My Way.